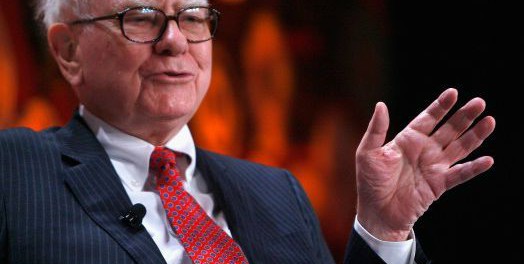 Warren Buffett published his 2013 annual letter to Berkshire Hathaway shareholdres. In it, he bulleted six “fundamentals on investing“.

Not only is Buffett the most succesful investor in history. He also shares his wisdom in an approachable and entertaining manner.

We compiled a few of Buffett’s best quotes from his TV appearances, newspaper op-eds, magazine interviews, and of course his annual letters.

Investing novices and experts alike the he has articulated through the years.

(If we’ve missed any of your favorites, let us know in the comments.)

1. Buying a stock is about more than just the price.

2. You don’t have to be a genius to invest well.

“You don’t need to be a rocket scientist. Investing is not a game where the guy with the 160 IQ beats the guy with 130 IQ.”

“To invest successfully, you need not understand beta, efficient markets, modern portfolio theory, option pricing or emerging markets. You may, in fact, be better off knowing nothing of these. That, of course, is not the prevailing view at most business schools, whose finance curriculum tends to be dominated by such subjects. In our view, thogh, investment students need only two well-taught courses – How to Value a Business, and How to Think About Market Prices.”

4. Don’t buy a stock just because everyone hates it.

“None of this means, however, that a business or stock is an intelligent purchase simply because it is unpopular; a contrarian approach is just as foolish as a follow-the-crowd strategy. What’s required is thinking rather than polling. Unfortunately, Bertrand Russell’s observation about life in general applies with unusual force in the financial world: “Most men would rather die than think. Many do.”

“After all, you only find out who is swimming naked when the tide goes out.”

“I have pledged – to you, the rating agencies and myself – to always run Berkshire with more than ample cash. We never want to count on the kindness of strangers in order to meet tomorrow’s obligations. When forced to choose, I will not trade even a night’s sleep for the chance of extra profits.”

7. The best time to buy a company is when it’s in trouble.

“The best thing that happens to us is when a great company gets into temporary trouble…We want to buy them when they’re on the operating table.”

8. Stocks have always come out of crises.

“Over the long term, the stock market news will be good. In the 20th century, the United States endured two world wars and other traumatic and expensive military conflicts; the Depression; a dozen or so recessions and financial panics; oil shocks; a flu epidemic; and the resignation of a disgraced president. Yet the Dow Jones rose from 66 to 11,497.”

9. Don’t be fooled by that Cinderella feeling you get from great returns.

“The line separating investment and speculation, which is never bright and clear, becomes blurred still further when most market participants have recently enjoyed triumphs. Nothing sedates rationality like large doses of effortless money. After a heady experience of that kind, normally sensible people drift into behavior akin to that of Cinderella at the ball. They know that overstaying the festivities ¾ that is, continuing to speculate in companies that have gigantic valuations relative to the cash they are likely to generate in the future ¾ will eventually bring on pumpkins and mice. But they nevertheless hate to miss a single minute of what is one helluva party. Therefore, the giddy participants all plan to leave just seconds before midnight. There’s a problem, though: They are dancing in a room in which the clocks have no hands.”

“Your  goal as an investor should simply be to purchase, at a rational price, a part interest in an easily-understandable business whose earnings are virtually certain to be materially higher five, ten and twenty years from now. Over time, you will find only a few companies that meet these standards – so when you see one that qualifies, you should buy a meaningful amount of stock. You must also resist the temptation to stray from your guidelines: If you aren’t willing to own a stock for ten years, don’t even think about owning it for ten minutes. Put together a portfolio of companies whose aggregate earnings march upward over the years, and so also will the portfolio’s market value.”

11. Forever is a good holding period.

“When we own portions of outstanding businesses with outstanding managements, our favorite holding period is forever.”

12. Buy businesses that can be run by idiots.

“I try to buy stock in businesses that are so wonderful that an idiot can run them. Because sooner or later, one will.“

13. Be greedy when others are fearful.

“Investors  should remember that excitement and expenses are their enemies. And if they insist on trying to time their participation in equities, they should try to be fearful when others are greedy and greedy only when others are fearful.”

14. You don’t have to move at every opportunity.

“The stock market is a no-called-strike game. You don’t have to swing at everything–you can wait for your pitch. The problem when you’re a money manager is that your fans keep yelling, ‘Swing, you bum!'”

“We will continue to ignore political and economic forecasts, which are an expensive distraction for many investors and businessmen. Thirty years ago, no one could have foreseen the huge expansion of the Vietnam War, wage and price controls, two oil shocks, the resignation of a president, the dissolution of the Soviet Union, a one-day drop in the Dow of 508 points, or treasury bill yields fluctuating between 2.8% and 17.4%.

“But, surprise – none of these blockbuster events made the slightest dent in Ben Graham’s investment principles. Nor did they render unsound the negotiated purchases of fine businesses at sensible prices. Imagine the cost to us, then, if we had let a fear of unknowns cause us to defer or alter the deployment of capital. Indeed, we have usually made our best purchases when apprehensions about some macro event were at a peak. Fear is the foe of the faddist, but the friend of the fundamentalist”.

“Long ago, Sir Isaac Newton gave us three laws of motion, which were the work of genius. But Sir Isaac’s talents didn’t extend to investing: He lost a bundle in the South Sea Bubble, explaining later, “I can calculate the movement of the stars, but not the madness of men.” If he had not been traumatized by this loss, Sir Isaac might well have gone on to discover the Fourth Law of Motion: For investors as a whole, returns decrease as motion increases.”

17. Price and value are not the same.

“Long ago, Ben Graham taught me that ‘Price is what you pay; value is what you get.’ Whether we’re talking about socks or stocks, I like buying quality merchandise when it is marked down.“

18. There are no bonus points for complicated investments.

“Our investments continue to be few in number and simple in concept: The truly big investment idea can usually be explained in a short paragraph. We like a business with enduring competitive advantages that is run by able and owner-oriented people. When these attributes exist, and when we can make purchases at sensible prices, it is hard to go wrong (a challenge we periodically manage to overcome).

“Investors should remember that their scorecard is not computed using Olympic-diving methods: Degree-of-difficulty doesn’t count. If you are right about a business whole value is largely dependent on a single key factor that is both easy to understand and enduring, the payoff is the same as if you had correctly analyzed an investment alternative characterized by many constantly shifting and complex variables.”

“SUPPOSE that an investor you admire and trust comes to you with an investment idea. “This is a good one,” he says enthusiastically. “I’m in it, and I think you should be, too.”

Would your reply possibly be this? “Well, it all depends on what my tax rate will be on the gain you’re saying we’re going to make. If the taxes are too high, I would rather leave the money in my savings account, earning a quarter of 1 percent.” Only in Grover Norquist’s imagination does such a response exist.”

21. Companies that don’t change can be great investments.

“Our  approach is very much profiting from lack of change rather than from change. With Wrigley chewing gum, it’s the lack of change that appeals to me. I don’t think it is going to be hurt by the Internet. That’s the kind of business I like.”

“Time is the friend of the wonderful business, the enemy of the mediocre.”

23. This is the most important thing.